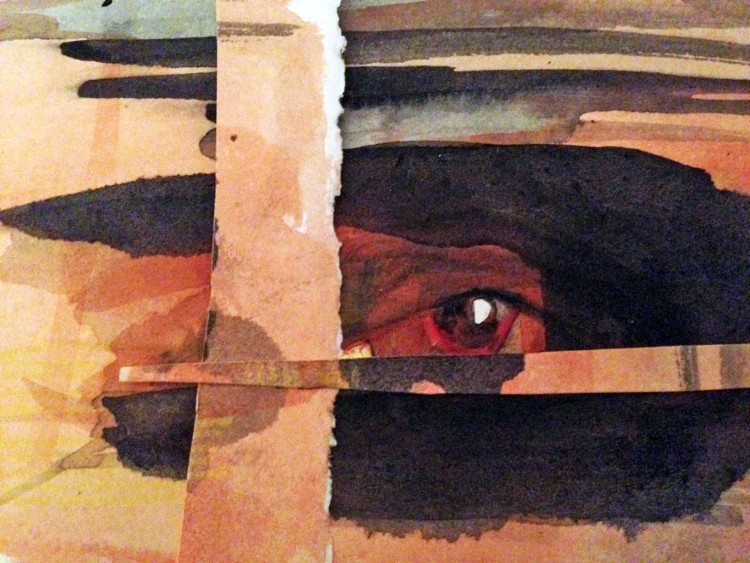 At the Edge is not the world’s first collaborative novel—it follows in a tradition that started in 1931 with The Floating Admiral, continued throughout the twentieth century with Naked Came the Stranger and Caverns, and is upheld in this century with A Million Penguins, No Rest for the Dead, and Hotel Angeline. But it is surely the first in which the voices of the authors unite as one. Not a hiccup mars the flow of this sophisticated literary mystery, which could easily pass as the work of a single author.

The plot unfolds as a collection of linked stories told through the eyes of twelve characters—strangers to each other, each with a rich interior life—who pass by an unguarded open pit at a busy pedestrian crossroads on a university campus in an unnamed Canadian city. A campus groundskeeper on her riding mower; a young immigrant estranged from his ex-wife and son; a graduate student writing a dissertation on a rare Persian manuscript; a professor’s secretary; an Agatha Christie expert—all manage to skirt the danger except one, whose fate and identity finally reveal themselves in the surprise ending.

At the Edge was written by sixteen writers from their midthirties to their late eighties; it puts writers who have never been published before alongside one who has been honored with Canada’s Governor General’s Literary Award for fiction and another who was a finalist for Canada’s Giller Prize. All agreed not to have their names attached to the specific chapters they wrote, a further expression of each writer’s support of the collaborative spirit at the heart of this project. Thus both freedom and constraint characterize the book’s structure, resulting in a singular work of fiction that both entertains and explores the mystery and rigors of literary form and content as well as the origins of storytelling itself.

Jared McLeod’s day starts here, within the dream of a stranger. The dream is about a train, an old-fashioned train with a monstrous steam engine puffing its way forward. The engine is black and menacing and pulls a long tail of boxcars—so many cars, in fact, that the person standing by the tracks waiting for the train can’t see the caboose. This person watching the train, a man, stands by the tracks for some time, waiting to cross and get on with his day—but there is no end to the train. The engine is now long gone, curved around the bend of the hill so it seems there is no beginning to the train, either, just a long stream of train cars that goes on forever, chugging forward.

This man watching the train—the dreamer—is Dennis. He doesn’t know Jared; Jared does not know him. They will never meet, though Dennis will picture him sometime later during the preliminary hearing, when he learns of Jared and the circumstances of his family. Dennis will imagine the boy’s face but will see his own son’s face there . . . when his son was young. Before.

Dennis wakes from the dream, panicked, to find himself in a hotel room. He feels a foreboding, a deep malaise that he has felt only twice before in his life. Dennis knew, both times, that something terrible was coming, a train he couldn’t hope to stop. He replays the dream in his mind, looking for clues that might tell him what’s to come. The first instance of the dream was before his wife’s cancer. There was a stranger, outfitted in western gear like some Hollywood cowboy, sitting at the dinner table—a stranger with a ferocious appetite and terrible table manners who ate everything offered to him and then took what was on Dennis’s and Lynn’s plates as well. Just before Michael’s first psychotic episode, Dennis’s dream was of a man with a gun standing outside their front door, threatening to come in. And the man did come in, in a way: the next morning, Dennis found his son in their unfinished basement, curled into a ball against the damp concrete corner where he had gone to hide. The boy had thought someone was trying to get into the house, to hurt him; he had even seen a laser light play upon his chest, as if a scope were aimed through the window at him. Michael pointed the light out to his father and showed him how it followed him when he moved. Dennis could not convince Michael there was no laser light, no gun, no stranger trying to get in.

Odd, Dennis thinks now, that he would dream of a stranger with a gun at their door, a scenario so similar to the paranoid hallucinations that have consumed his son. Some primal archetype the mind offers up when under threat, he imagines. A warning.

Dennis lies between the crisp white sheets in the hotel room—the Best Western room identical to so many others he’s stayed in while on business trips—searching his memory of the dream about a train for clues. Was there any warning of an oncoming sickness or an attempt at suicide by his son? But there is only the train, with no apparent end and no way across the tracks. Dennis pushes back the sheets and sets his feet on the carpeted floor. Perhaps this time he can prevent whatever is coming; he can stop the train.

He reaches for his cell phone on the nightstand, presses the speed dial for his home number, and waits for his son to pick up. He turns to the window while the phone rings. Outside, birds twitter. A breeze blows cool autumn air in from the lake. And in the distance he hears the rumble and clack of an oncoming train.