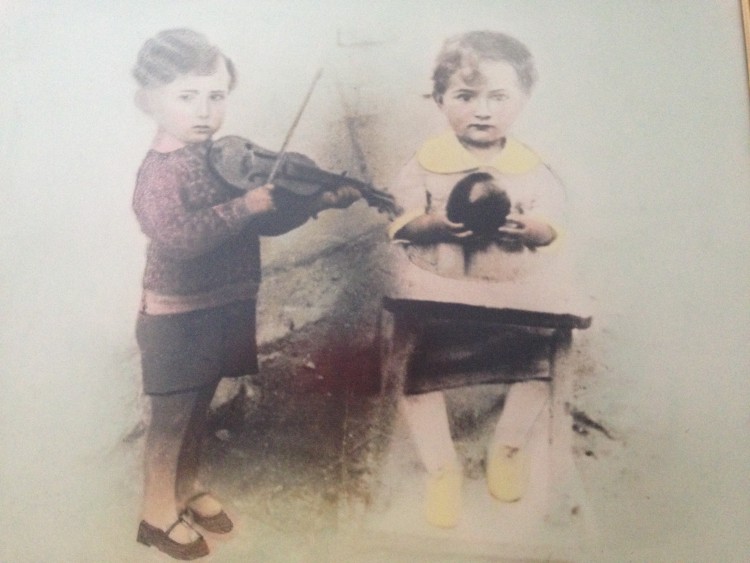 Photo from the Schnitzer family collection

Two children—bright, sensitive ten-year-old Anne-Gertrude and her younger brother, Stellar, barely seven—believe their family is threatened by a stranger taking pictures of them around their lakeside home. This anonymous man soon takes on monstrous proportions, in part because Anne-Gertrude’s burgeoning imagination and self-awareness are stoked by her exposure to Holocaust films—a macabre fascination encouraged by Geraldine, the children’s favored aunt.

The children’s terror magnifies when their mother, Eurydice, stumbles while cross-country skiing and the fall leaves her comatose. As her mother lies uncommunicative and helpless, Anne-Gertrude encounters a spectral visitor named Orpheus, who appears at her bedside during the night. Orpheus leaves behind chapters from a book revealing stories of extermination as well as the policies and practices that consumed Nazi Germany and informed the postwar imagination. As Eurydice awakens, her children—poisoned by family secrets and the lies their elders have long hidden—renounce their mother, with tragic consequences.

In poetic language reminiscent of Gertrude Stein and Marguerite Duras, The Woman Who Swallowed West Hawk Lake brings to life the effects of the Holocaust on a modern family. Its blurred realms, its dreamlike sequences and visual poetry, its book-within-a-book elements, and its mythological themes all intensify the horror of the Holocaust—a catastrophe whose dimensions can never be sedated, assimilated, or neutralized. With West Hawk Lake, Deborah joins writers such as W. G. Sebald and Cynthia Ozick in examining the Holocaust’s as a work of imagination transformed by historical evidence.

In the midnight that wakes Anne-g more often than not the book, There, You Are, sparkles. Anne-g has hidden it in her under-the-bed special box found secondhand with embellishments faded. Though the lock is broken, the box is saved for things most save-able. The seaweed that aunt Geraldine brought back from the sea when she went there last year, on her own, for the first time, by train to meet the cousins from Boston. The clasp from a pin given to her by BiancaDave on her tenth birthday, a pin special and lost in the tall grasses the day it was given, with only the clasp stuck to Anne-g’s sheep sweater; the letter from Fern written in wood speak sent from Tunisia when she was eight and the wood people were highly developed; the heart Stellar had made when she with mumps and measles in one fell swoop made being-sick history.

In the midnight, the book sparkles inside the box. Anne-g feels it, grateful because it’s such an important first chapter and she is sure there will be more. There must be more because there is only her mother sleeping, sleeping and no one to ask. Again and again Anne-g wonders if she might read it to Stellar. Close to waking him on the nights when she is sure, on her hands and knees by his bed, her fingers aching so much she chews them to stop her longing to touch his pointy shoulder. Could he listen? Her not-yet voice forbids it and so pushing herself to a limit she is more sure of, Anne-g turns to the window boxed in her own room, the moon waned, and the child who must be thumb-nailed equally in the night sky, watching out. Must be. Must be. If the stars, so the child. Against the clouds, inside rain undropped, behind a misted rock face she traces in the sky clouds, even if the child were suddenly to assert itself as a mountain range in the middle of this crater lake, a range erupting as Vesuvius, Anne-g, trembling, would welcome its burned open mouth to her own.